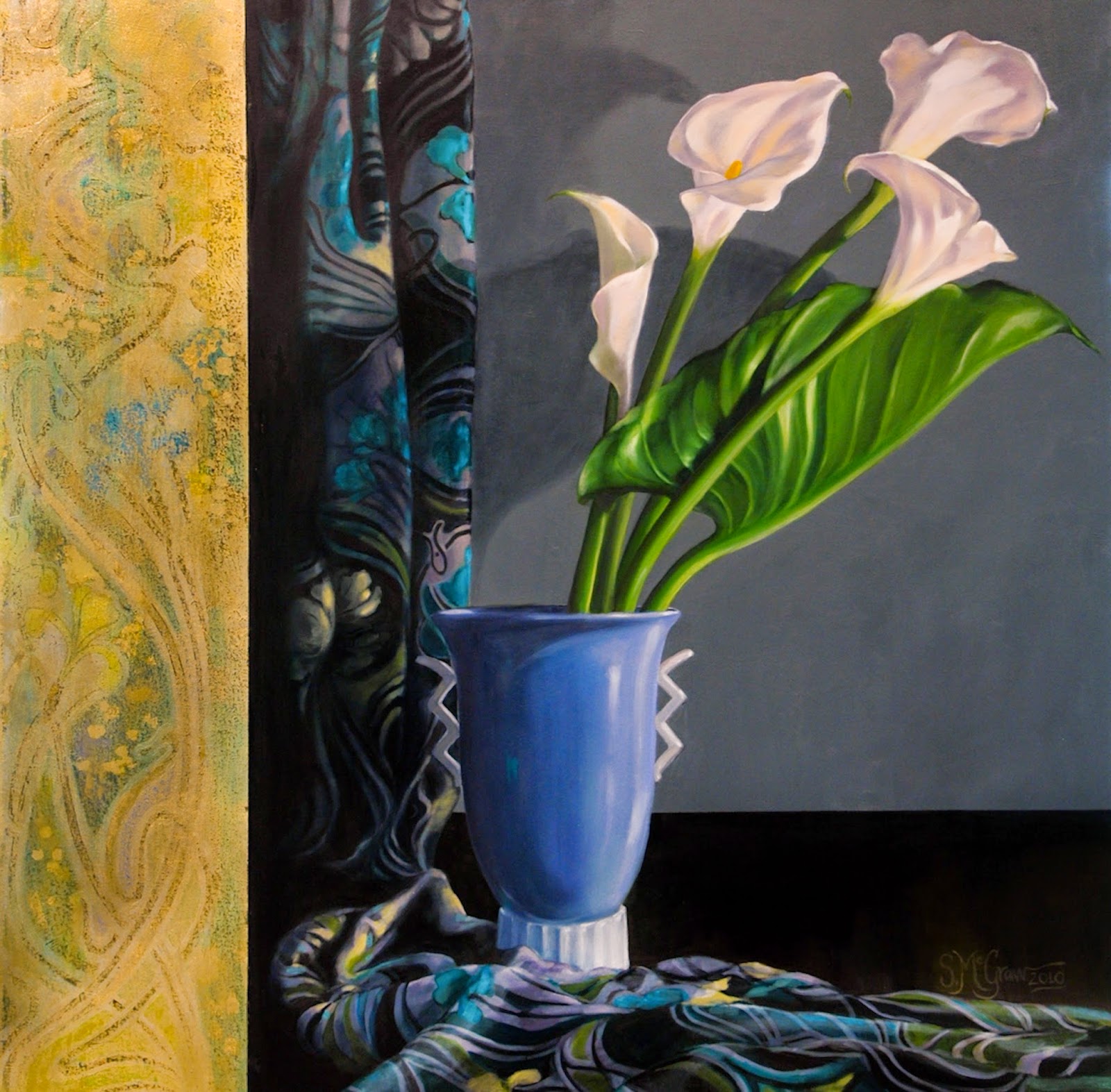 This painting of calla lilies (above) is a cousin to the one on display for the month of November at Archway Gallery (at left). While the callas are more graphic and deco in nature than the more traditional florid and full-blown bouquet, both paintings are layered with elements of the setting. In the case of the callas, the silk deco-print background is repeated as the vertical bar on the left edge and glazed with gold leaf.

Mixed Bouquet (left) is a favorite of mine. I painted it when I first moved to Texas from Toronto in 2006. I had planned to be in TX for a month or two and was housed in my then-boyfriend's tiny apartment, (or as it came to pass... boy-fiend... but that's another story for another time.) The flowers were bunches of roses, eucalyptus, stock, tulips, and sprays of filler flowers from the local grocery store along with some purloined ivy that covered a neighboring wall, and the vase was the el-cheapo glass variety. I photographed the bouquet from different angles and when it came to composing the painting, several versions were combined for a fuller, more opulent bouquet. I chose the tulip to paint large partly because it was neutral and wouldn't fight the rest of the palette, and also to guide the viewer to the tulips in the composition -- their shape and tonality.
At the time I painted Mixed Bouquet I'd been toying with the concept of layering images in still life paintings and I had experimented with this composition in portraits, like this portrait of Stephanie.
﻿
I'd often been frustrated with standard portraiture because I love love love showing not only the figure but also the sitter's environment, since our possessions and décor say so much about us. But if I painted the full figure the face was generally tiny and therefore unclear. By floating a tightly rendered close up of the subject's face onto a scene of them in their space that is more loosely painted achieved both goals. Of course balance in the composition is important since if you're not careful the result can be akin to a two-headed monster.


﻿﻿﻿﻿
In a sense, these layered still lifes say look here, don't miss this. They can bring to the viewer's attention something that may be overlooked... an insignificant spray or a blossom that is overpowered by brighter or more showy blooms, like in the above painting: Tulips and Iris, 36 x 60 inches, oil on canvas. Or an element can be enlarged on and explored like the vase in this painting, below: Magnolias in a Chinese Vase, 24 x 30 inches, oil on canvas. 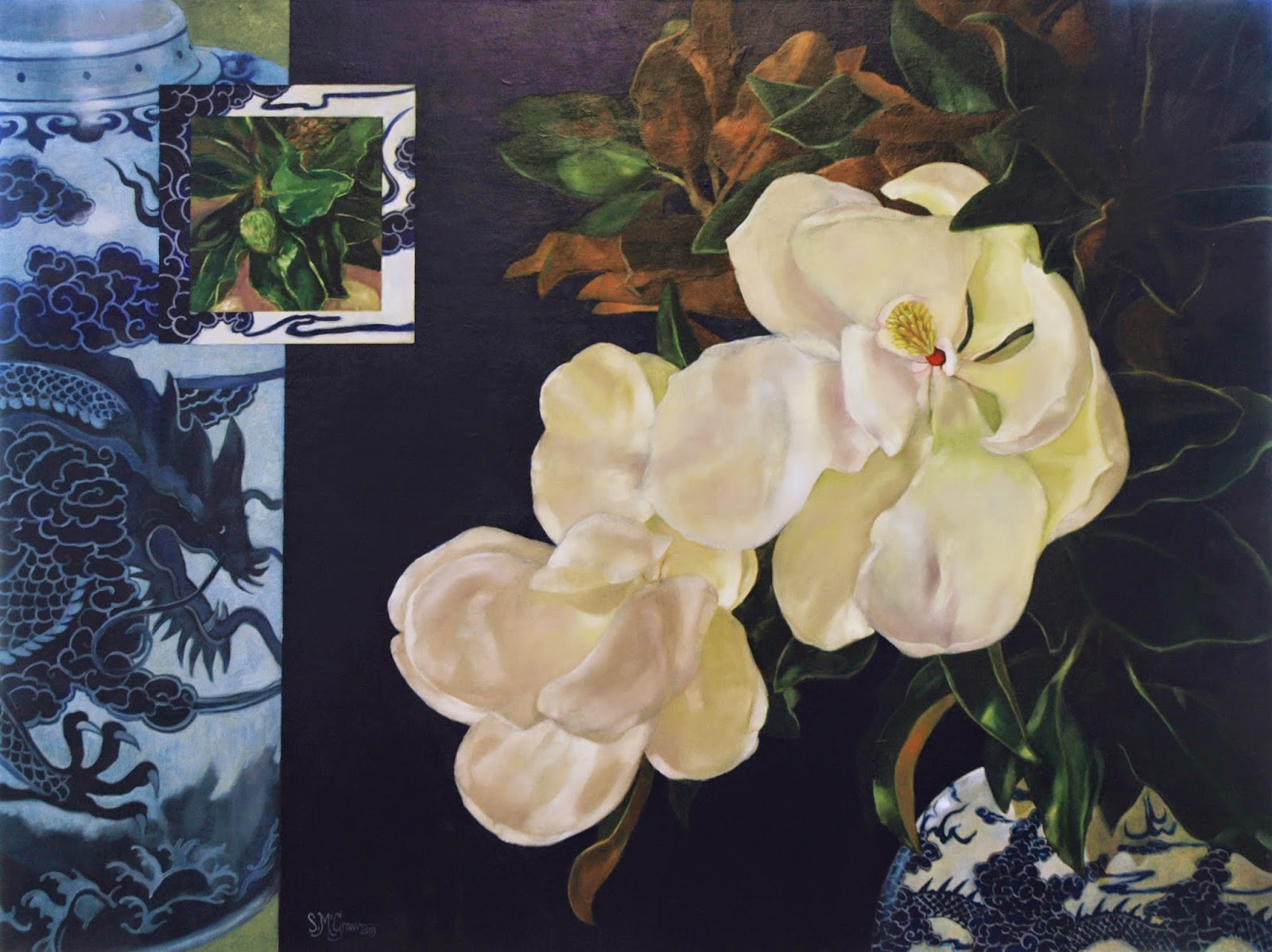 A while ago a friend called me and asked if I'd mind if she used my technique of layering an insetting panels. I said "By all means... go for it. let's start a genre, a movement of modern day realism!" A few days later came a phone call. She yelled into my ear while she laughed, "This is so much work! I have to do three different paintings!"
No kidding... If a picture is normally supposed to be worth 1,000 words I want mine to say 100,000. I want to lead the viewer's eye through the composition and for the color, texture, subject matter to speak to them, not necessarily with my vision, perhaps with their own interpretation.
Thanks for stopping by.
Cheers
Sheila
﻿
Posted by Sheila McGraw at 4:22:00 PM

Email ThisBlogThis!Share to TwitterShare to FacebookShare to Pinterest
Labels: Painting