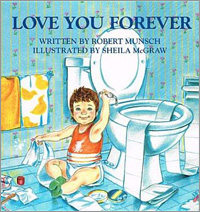 The cover of Robert Munsch’s sentimental favorite Love You Forever, first published in 1986 by Firefly Books, has been chosen as Canada’s most iconic book cover in a contest launched by the Canadian Broadcasting Corporation, on its books Web site.

During the weeks of voting, visitors to the site eliminated other contenders, including the covers of Michael Ondaatje’s The English Patient, Margaret Atwood’s The Handmaid’s Tale, and Yann Martel’s Life of Pi. The final round came down to two children’s books; and Love You Forever just edged out the quintessentially Canadian Anne of Green Gables by L.M. Montgomery.

Want to reprint? Get permissions.

Love You Forever illustrator Sheila McGraw told the CBC that the win took her by surprise: “It’s shocking because the cover was up against Anne of Green Gables at the end,” McGraw said. “To be in the company of such a classic, fantastic book made me think we wouldn’t pull that off. It was really close.”

According to Firefly, Love You Forever has sold more than 22 million copies in North America alone, and it was recently chosen as one of 11 children’s books that Canada sent as an official gift to Prince George, the Duke and Duchess of Cambridge’s newborn son.